5 areas in which artificial intelligence should be implemented 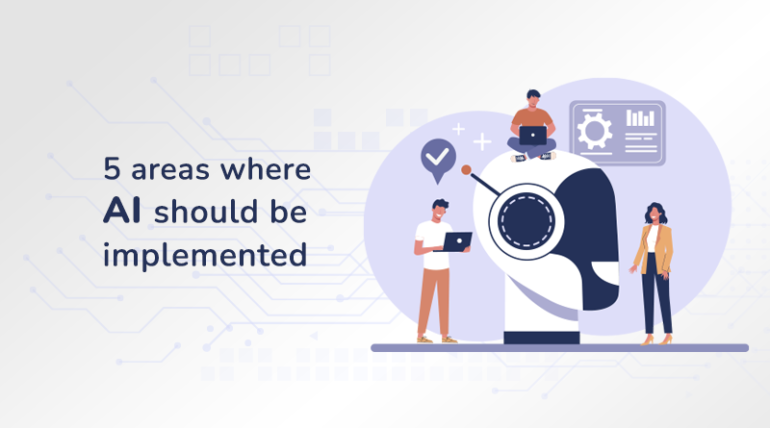 Artificial intelligence, or machines that mimic human thought patterns, is intense research and increasingly relevant. An AI-powered system can add functionality to an organization’s offerings without requiring additional resources.

Since AI was already making a significant impact on several industries, it will continue to do so.

Below, we will discuss the major subjects and areas where Artificial Intelligence has already been used and will soon become fully implemented.

AI in radiology improves the accuracy of diagnosing critical diseases, speeding up treatment, and diagnosis.

Additionally, the availability of deep learning data for big data will help integrate AI into other key areas, allowing the automated technology to reach new levels with no flaws and maximum efficiency.

Using AI to teach creativity, artists have gone so far as using AI to design sculptures and paint paintings that mimic masterworks. For example, using the style transfer technique, artists can “teach” AI algorithms by showing them the painting style like Impressionism. The algorithm then applies the same technique to photos and videos.

The discipline of policing is another domain in which Artificial Intelligence will play a major role, as it will be fully reliant on AI technology by the year 2025. AI’s power will be used by surveillance agencies to automatically process CCTV and drone footage, allowing for easy and rapid identification of anomalous behavior.

In the United States, the study suggests that 20 of the nation’s 50 largest police departments use predictive policing techniques to forecast probable crime scenes or predict probable victims. Sex discrimination fears are based on the idea of inaccurate data, and so police and communities have limited capacity to assess such complex systems.

The future of education will see personal tutors and other AI technology delivering personalized education to scale. The use of AI will widen educational access, making it easier to learn long-term and retrain.

In the future, according to earlier predictions surrounding the technology, individual student data will be processed so that those who need extra attention will be recognized and helped. By 2030, you can expect the class and individual learning to become almost indistinguishable.

The quest for driverless cars goes beyond the scope of simply passenger transportation, as Uber runs now, or Google has been testing for years. Otto, a startup working on driverless trucks, was recently acquired by Uber. We will probably see some major improvements in the transportation sector, which deals with shipping goods worldwide.